Kampong Kdei Bridge, also known as the Dragon Bridge or Spean Praptos, locates in Siem Reap province and has a life expectancy of over 1000 years. It is said to be the oldest laterite bridge in Southeast Asia and the oldest bridge in Cambodia and worth a visit during your Indochina tour.

The Kampong Kdei laterite bridge is an evidence of the golden age of Angkor Wat that anyone on Cambodia tours should visit. This bridge was the longest rock arch in the world with twenty arches spanning 87 meters. If visitors pay attention to Cambodian currency, you will see the bridge printed on the 5000 riel. 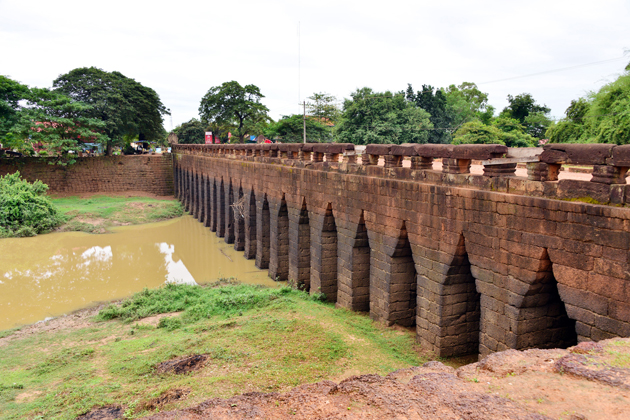 Visitors can visit Kompong Kdei on the way from Siem Reap city center to Angkor Wat and Angkor Thom. The bridge is located in Chi Kreng district, about 50km southeast of Angkor Wat.
Located on Highway 6, the most ancient bridge in Southeast Asia attracts the view of anyone passing by the seven-headed serpent statue – Naga – the pride of the Khmer people.

The Architecture of Kompong Kdei Bridge 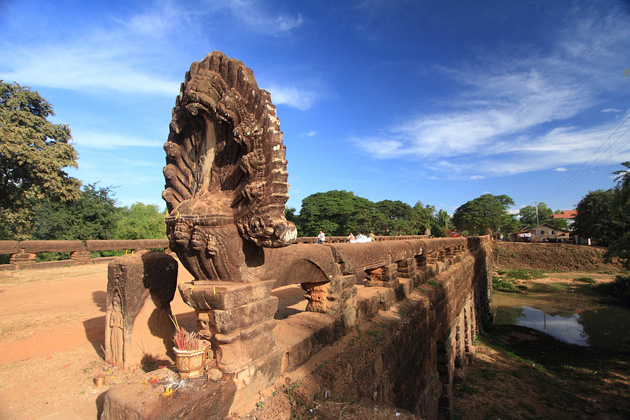 On the two sides of the Kampong Kdei Bridge, there are two statues of the seven-headed Basilisk Naga, on the snake’s head still holding elaborate decorative details. The body of the curved body is like a snake’s body, lying snuggled through the torrential flow of the Kampong Kdei River before. The Khmer Naga’s seven-headed serpent statue represents seven ethnic groups in ancient Cambodian society and the Khmer claim that the Khmer people belong to the Naga. And sacred masks are worshiped by the Cambodian people as protectors of their lives.

Kompong Kdei Bridge from Past to Present

Throughout the harsh battles, suffered bombs and harsh weather but the Dragon Bridge is still standing horribly, survive and endure with Angkor Wat and is the witness of the Angkor.
Today, in order to move to Angkor Wat, visitors will cross the Kampong Kdei Bridge, so that in order to preserve the bridge, the local government has built another bridge for traffic to avoid strong impact on the Kampong Kdei Bridge.
Visitors to this ancient bridge admire the image of thousands of beehives carved, stacked on each other just to create a masterpiece for today’s life. In particular, the Kampong Kdei was built without any binder, but the honeycomb stack was solid and made up of solid pillars supporting the deck. 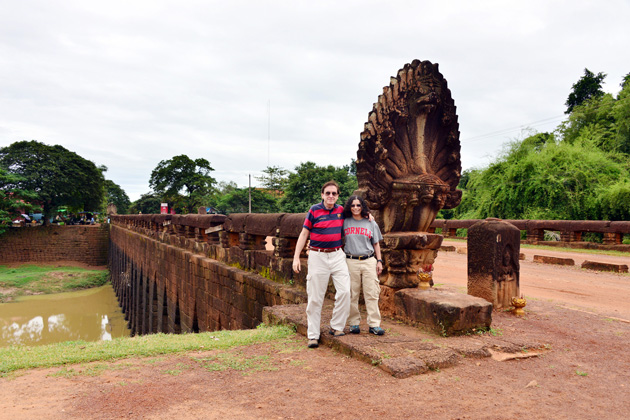 The bridge is connected by huge rocks, engraved with fine details and hooked together. Tourists are amazed by the craftsmanship of the Cambodian craftsman who built the ancient millennium-old Kampong Kdei. Unlike historical temples, magnificent temples, immense fields, from Siem Reap center to Kampong Kdei Bridge, you will immerse yourself in the idyllic setting of the peaceful countryside. In the rainy season, the water of the Kampong Kdei River rises; children gather for fun and bathe in the river.

The bridge is free to visit the whole day, it is forbidden to travel on the bridge so visitors are only allowed to walk on the bridge. You can go from Highway 6 to the bridge or ring road through the village of Kampong Kdei. You can visit Kompon Kdei Bridge nearly all-time in a year but it should be the rainy season (May to October in Cambodia). Rains will raise the water level of Kompong Kdei river. From the bridge, you can behold the amazing scene of the river and surrounding nature,

During the Cambodia tour, especially the Siem Reap tour, you should not miss this unique architecture. When visiting Kampong Kdei bridge, you will feel the history of Angkor – the heroic history of the Khmer.

How to Book an Indochina Tour?