The origin of some Vietnamese musical instruments can be dated back to thousands of years ago, in the Hung Kings Dynasty, the first form of government known in Vietnam, while others were invented or upgraded from primitive ones about couple hundreds of years ago. 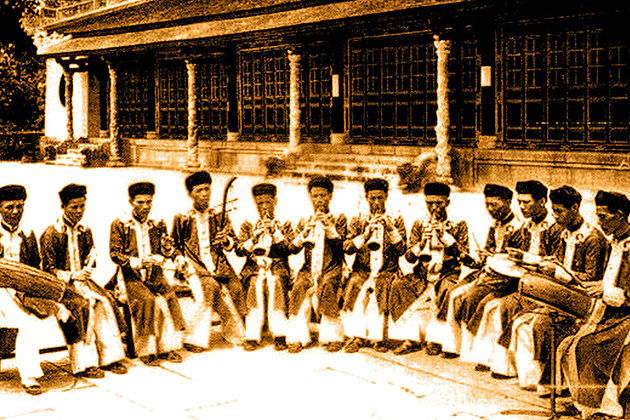 Most of the traditional Vietnamese musical instruments are string, wind, and percussion instruments, which are made of natural materials like wood, bamboo, stones, ivory, and animal skins. They can be played in solo or orchestra performances. While people in northern Vietnam use more string instruments, people in the mountainous area tend to create melodies with percussion and wind instruments.

Made from a segment of bamboo carved an oval hole to blow in one head and six other holes along the body to adjust the sound, Bamboo flute is believed to contain the musical essence of the Vietnamese countryside along with the four tranquil seasons. Sao Truc is played by putting the flute’s body horizontally to the right and the mouth is placed on the oval hole. The airflow can be adjusted by pouring the steam slowly or strongly to produce different tones. Vietnamese people used to play this traditional musical instrument on the fields when taking a rest or even at night before going to bed. 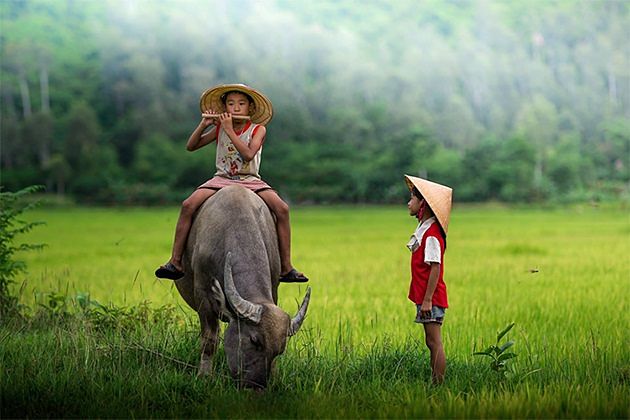 Ken Bau is commonly used in weddings, funerals, celebrations and especially in Nha Nhac (Vietnamese Court Music). This trumpet has many versions based on regions and uses, mainly classified into three types: low-sound trumpet, medium-sound trumpet (most popular) and high-sound one. The special feature of Ken Bau is its bell made of the dry peel of gourd (“Bau” means gourd). Ken Bau producé the strong, resonant, and high-pitched sounds so only men can play this trumpet. The instrument is best at expressing emotions, sometimes happy and bright feelings, sometimes gloomy and tragic ones. 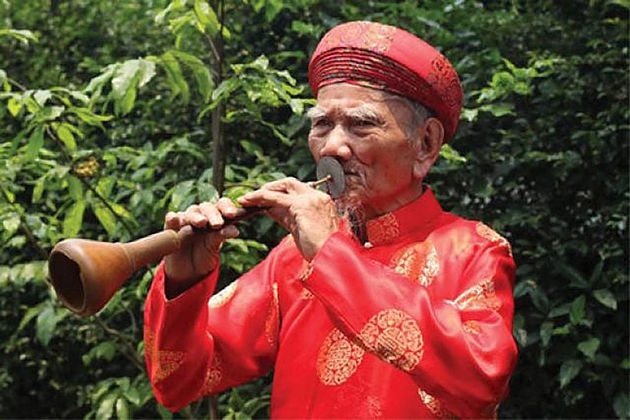 Dan Bau or Doc Huyen Cam is the one-string musical instrument of Vietnamese people, strummed by a rod or a plectrum. Dan Bau has two types of bamboo and wooden box:

Bamboo: The body is made of one piece of bamboo which is approximately 120 cm in length and 12 cm in diameter. The surface is whittled partly.
Wooden Box: This is the improved version, mainly for professional artists. This type has many different shapes and sizes. The structure is similar to the old version. 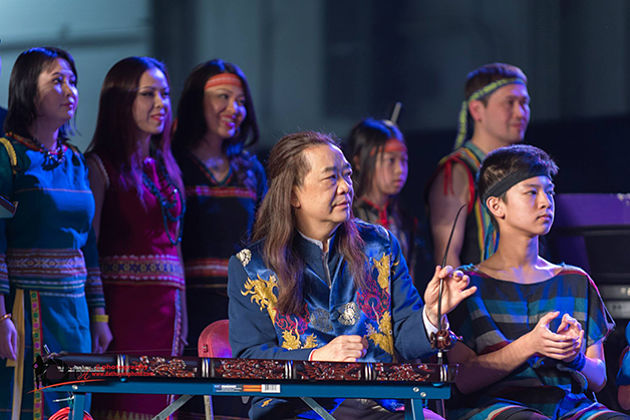 The string runs through the body. In the past, it was made of silk, later it has been replaced by iron. “Bau” part is made of half a gourd. It works to increase the volume for the instrument. Today, it can be made of wood with the role of aesthetics. 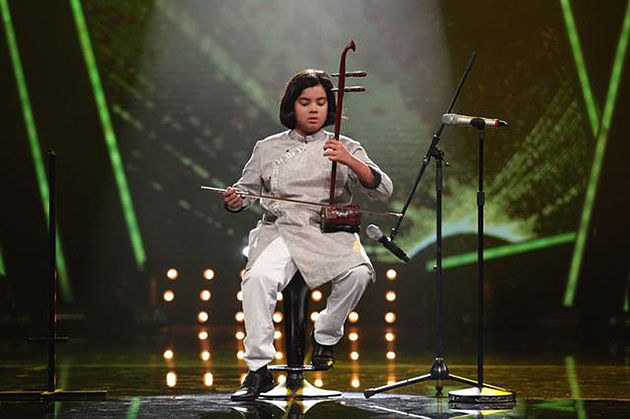 Vietnamese people call it Dan Co because its shape is like a stork: the wire axis bows down as the stork’s neck, the body is like a stork’s body and the sound is similar to the stork’s noise. In all of the Vietnamese traditional orchestras, music centers, there is always the appearance of Dan Nhi. The sorrowful sound of Dan Nhi is exploited in homeland songs or sad songs.

This is one of the longest musical instruments created by Vietnamese people in Le Dynasty (XV-XVIII century). In Ca Tru or A Dao singing, Dan Day is the familiar instrument along with drum and beat. Besides, the sound of Dan Day is very appropriate to be the background for sad old poems. More special than other musical instruments, Dan Day has a unique way of strumming, so it can imitate a lot of voices and as a result, there is a diversity in playing. 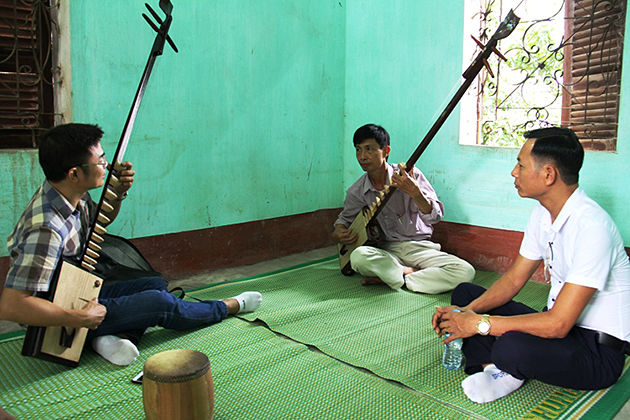 Dan Ty Ba is a string instrument which is frequently present in a traditional orchestra. This pear-shaped instrument had twisted silk strings but be made by nylon today. It is a popular instrument in the Royal Court and if your Vietnam travel packages take you through Hue City, you will have a chance to encounter it. Dan Ty Ba is best when accompanying Ca Tru singing, which is recognized by UNESCO as intangible heritage of humanity. 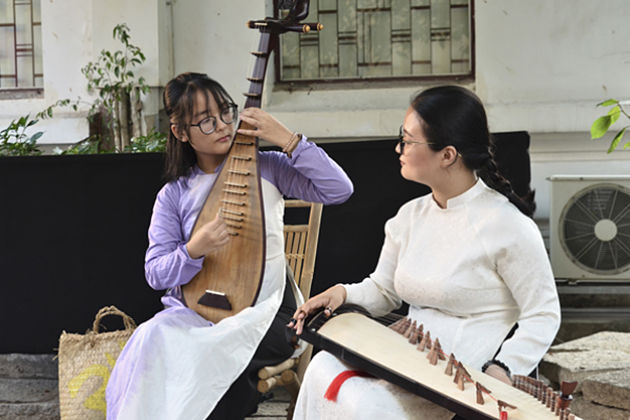 According to ancient carvings, Dan Nguyet translates into English as “moon lute” and it appeared in Vietnam in the 11th century. Its popularity has been maintained and Dan Nguyet is considered an important part of the culture of the Kinh people. It is a two-stringed instrument, strings formerly of silk bit now nylon, and played in both folk music and classical music.

Dan Nguyet is distinguished by its pure, loud sound as well as its capacity to express different emotional moods. It is often used for solemn events and rituals, funerals and musical recitals. This traditional instrument can be played in solo, as a part of an orchestra, or combining with other instruments. This two-string guitar is also used as an ornament due to its beautiful appearance.

Referring to the traditional musical instruments in Vietnam, it cannot fail to mention the Dan Da of the Central Highlands. It is a set of stone slabs of different sizes and shapes used to make percussive melodies. The tools to knock on the surface of the stone and the herb is also made of green stone. It requires skills to fashion the stones into a shape where they would produce a melodious sound. 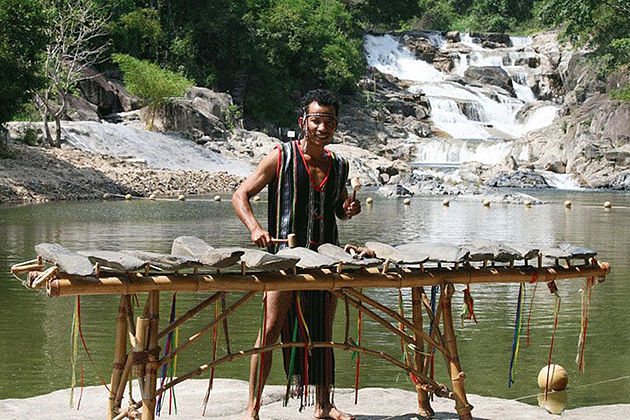 For some ethnic groups in Central Highlands, the stone slabs are sacred and preserved as family treasures played during grand ceremonies for the gods. Other groups use the stone for setting crop protection devices.

The T’rung is a traditional musical instrument in Vietnam that is common among the small ethnic groups in the Central Highlands of Vietnam. It is made of short bamboo tubes of different sizes, with a notch at one end and a beveled edge at the other. The long big tubes give off low-pitched tones while the short small ones provide high-pitched tones. The tubes are put lengthwise horizontally and combined together by two strings.

In the majestic Central Highlands, T’rung is frequently played after working and during an evening gathering in the communal houses around a bonfire with young boys and girls singing and dancing merrily. The role of T’rung is also highly appreciated by Vietnam’s national music band. It means that whether you are on holiday in Vietnam, you may hear the T’rung if you attend any traditional musical evening. Or if you are looking for a special gift or souvenirs for your beloveds, why not a T’rung?