Thien Mon Dao: Being a Vietnamese traditional martial art that was created by Nguyen Khac family line in Ung Hoa district, Hanoi, Thien Mon Dao has five generations and amazes people with nearly impossible martial art performances. You will certainly be shocked at the performance of martial artists running on the surface of water by a mat, driving a nail into some parts of the body, using eyelids to lift water or bend iron rods, or letting the truck roll over the body, etc. So, what can they do? It is thanks to Qigong – a Chinese system of physical and mental training to achieve health, practice martial arts and self-enlighten. Besides, Qigong also encourages the artists to aim at a healthy and useful life.
Lieu Doi Wrestling: Wrestling has a long tradition and is very popular in North Vietnam. This is also a sports competition activity in many spring festivals, especially in Lieu Doi village, Liem Tuc commune, Thanh Liem district, Ha Nam province. In February 2018, Lieu Doi Wrestling was recognized as a national intangible cultural heritage. 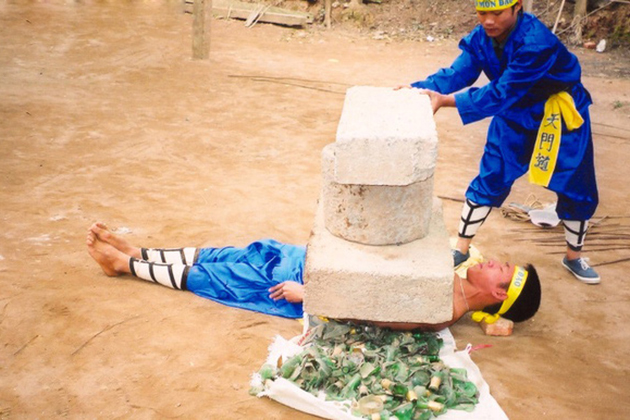 It is the oldest Vietnamese traditional martial art that derived from Thanh Hoa province. Nhat Nam martial art results from the typical characteristics of Vietnamese body shape that is pretty short and small but they usually had to fight against the Northern enemies with strong physical health. As a result, in order to defeat the invaders, the Vietnamese people created a kind of martial art that focus on their own strengths – the skills and flexibility, avoiding the enemy’s aggression then choosing the opportunity to strike the right point – the opponent’s weakness. In addition, Nhat Nam martial artists are expert at 17 types of weapons, 32 basic fists, and 42 supplement ones.
Nam Hong Son: It was created based on the combination of the Vietnamese and Chinese martial arts by Master Nguyen Nguyen To. Nam Hong Son martial artists practice Chinese forms in the first three years, including the fists such as horse stances, techniques, and forms such as Dragon Tiger Form, Phoenix Form, nunchaku techniques, Single and Dual Swords, etc. then move to Vietnamese ones, including Lao Mai Quyen, Sieu Xung Thien, etc. combining with Qigong and inner force. Besides the characteristics of the two ethnic groups mentioned above, Nam Hong Son still preserves some ancient martial arts under the Nguyen Dynasty.

Vovinam is a traditional Vietnamese martial art that was founded in 1936 by Master Nguyen Loc who also proposed “Cach Mang Tam Than” hypothesis to promote the martial artists to renew themselves and pursuit good physical and mental health. Vovinam was developed based on the combination between Vietnamese traditional wrestling and the quintessence of Chinese, Korean, and Japanese martial arts. Following the discipline of “hard and soft” harmony, Vovinam artists practice the techniques of hands, elbows, kicking, knees and weapons such as swords, knives, scimitars, sticks, fans together with counter-attacks, lock-ups, and wrestling. Of all the traditional Vietnamese martial arts, Vovinam is the largest and most developed one in Vietnam with many students in more than 60 countries around the world, including Poland, Belgium, Cambodia, Denmark, Germany, Morocco, Norway, Russia, France, Romania, Switzerland, Sweden, Singapore, Uzbekistan, Thailand, Italy, Australia, India, Iran, Spain, Algeria, Taiwan, etc. 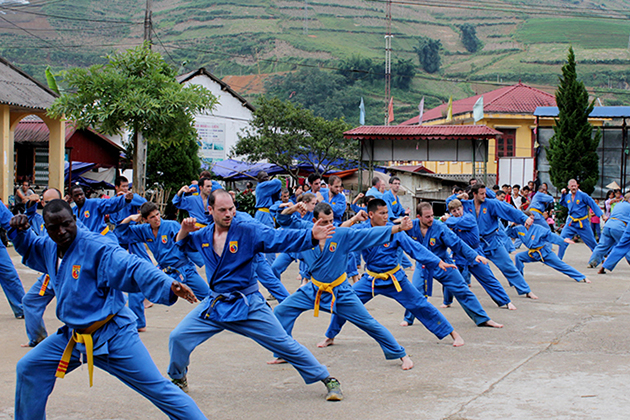 Martial Arts in the center of Vietnam

Binh Dinh used to be a region in the Champa Kingdom which preserved a diversity of traditional martial arts shown in the ancient reliefs of Cham people. This is also the center of the martial arts in the center of Vietnam, which has a very close relationship with Tay Son Dynasty (1778-1802).
In the 18th century, some famous masters from northern Vietnam and China moved to settle in this area and taught martial arts to local people. They are Truong Van Hien (in the regions Thanh Hoa, Nghe Tinh), Tran Kim Hung (whose ancestors founded Truong Dinh village, Tay Son), Diep Kim Tong (from Fujian, China), and Dinh Van Nhung (Ninh Binh province). These masters practiced martial arts for the Tay Son brothers – Nguyen Nhac, Nguyen Lu, Nguyen Hue and most of the generals of the insurrection.

From the end of the 18th century, Tay Son Martial Arts (also known as Tay Son Martial Arts Battle) was founded by the combination of formality and skills from a variety of Binh Dinh Groups. The principle of this kind of martial art is: “Strength is the priority, then the rapidity, and the goodness” that emphasizes the special importance of power, ingenuity, and pragmatic technique. However, with the recession of the Tay Son Dynasty, many of these techniques were only passed through the generations in the martial arts families in Binh Dinh.
From the Tay Son Dynasty till now, Binh Dinh Groups includes a lot of factions from Binh Dinh and surrounding areas such as: Roi Thuan Truyen, An Thai Quyen, An Vinh Quyen and other forms of family martial arts like Tay Son Nhan, Thanh Long martial art, Binh Dinh Sa Long Chuong, Tan Son Bach Long, etc.

Moreover, many famous forms originated from Binh Dinh Groups such as Ngoc Tran Ngan Dai, Lao Mai Quyen, Than Dong Quyen, and Yen Phi Quyen were put into the martial art examination program of Nguyen dynasty and some of them have become the compulsory forms of the Federation of Traditional Martial Arts Vietnam. 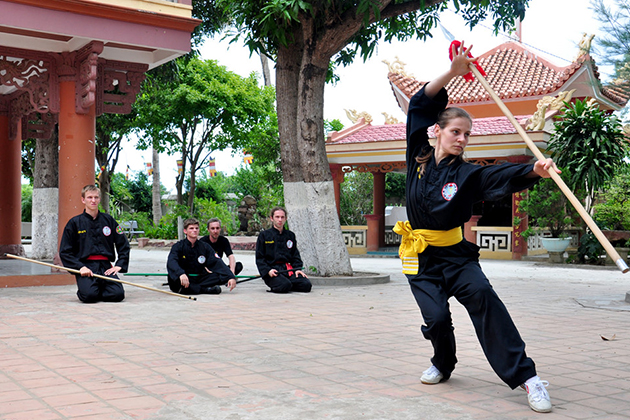 The martial arts in South Vietnam appeared with the process of immigration and settlement of the Vietnamese in the 18th and 19th centuries, including a variety of stories:
– After settling in the South Central, the Nguyen lords continued to expand their territory towards the south, migrating from Quang Nam, Da Nang, Quy Nhon to break fresh grounds in the Mekong Delta.
– Along with that, the Nguyen Dynasty exiled many criminals into the South, which forced them to have good skills in fighting to survive in the brand-new wild lands.
– In addition, at the end of the 19th century, the remnants of Nguyen Army defeated by Tay Son insurrection fled to South Vietnam, gathering in Dong Nai and continuing to recruit the martial artists to forge the training.
– When the Nguyen Dynasty was established in 1802, many of these people passed the imperial court examinations and became famous martial artists.
– After the debacle of Tay Son Dynasty, its royal family and relatives moved to the South to avoid the revenge of King Gia Long (1762-1820), forming a lot of famous martial art groups thanks to their own knowledge and their family’s inheritance.
All of the above various origins have created a system of Southern traditional martial art that was mixed by the groups of Binh Dinh, Thanh Hoa, Nghe An, Red River Delta and Chinese martial arts (like Shaolin), Cham and Cambodian martial arts. Besides, the Southern also adjusted the martial arts to get adapted to the severe environment of the fresh grounds to fight against the wild animals, creating Southern Groups such as Tan Khanh Ba Tra, That Son Quyen, Yin-yang martial art group and Kim Ke group. 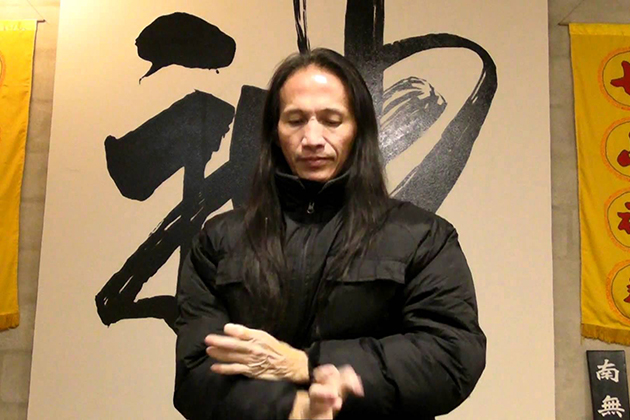