Until now, there are two world cultural heritages in Laos that were recognized by The United Nations Educational, Scientific and Cultural Organization (UNESCO). Both of them are the best representation for the “A million elephants” country where the cultural and architectural values have been created, cultivated and handed down over the generations. Let’s discover the World Cultural Heritages in Laos with us!

Luang Prabang was recognized by UNESCO as the World Cultural Heritage in 1995.
Being located in the North, Luang Prabang is a historical city and it was the royal capital, the center of the Kingdom of Laos before 1975, which witnessed 63 dynasties. Besides, the city is a Buddhist center with thousands of pagodas, some of which are gloriously gilded with magnificent and mysterious architecture. In addition, the city is also an artistic and architectural preservation place with over 30 remarkable palaces built in the 14th century and about 40 ancient temples constructed under different dynasties, each of which is a cultural monument of high artistic value. Moreover, hundreds of old wooden houses which were designed in different personal styles arranged along the long narrow streets, creating lovely and quiet scenery. 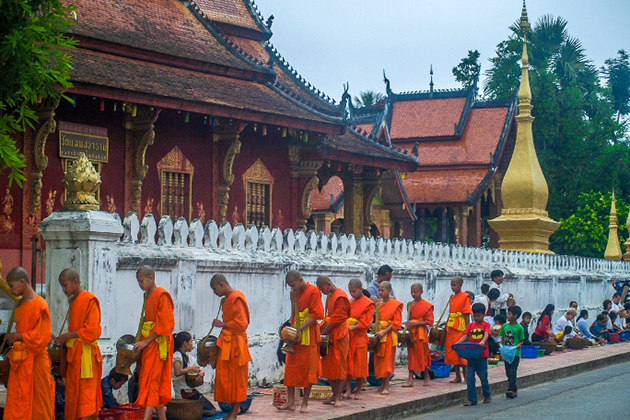 Luang Prabang is also a charming city gracefully nestled nearby the Mekong River and poetic Nam Khan surrounded by the cloudy mountains. There are some prominent monuments that attract the tourist to this beautiful land. Wat Xiengthong – the ancient royal shrine built in 1560 and Wat May with tiled roofs of 5 layers are two of the beautiful tombs with unique architectural features and ingenious decoration. Another tourist site is Wat Visounarath. In the past, there were many precious Buddha statues carefully stored in the stupas. Due to the time and the devastation of the weather, the stupas have become dilapidated so the statues of Buddha, including the famous Buddha statue of Pra Bang Buddha which existed here during the period from 1513 to 1894, have been moved into the Imperial Museum. Another scenic spot is Wat Vixum which has the largest Buddha statue in Luang Prabang. In this architectural complex, there is a famous monument called Ta Mak Mo that has excellent hemisphere architecture. Coming here, visitors can climb 328 steps to Phousi (stone block located at the top of the pagoda in the center of Luang Prabang). From this point, it is an unforgettable experience to see the ancient royal tombs with the impressive double-cross shape in a combination of Lao and French sophisticated architectures. Now, these tombs have become the museums with many precious objects.
Despite being a small town with a population of only 22,000 people, Luang Prabang is one of the most important tourist destinations for foreigners in Laos. Recently, Luang Prabang has been voted as the 10 most selected cities in 2007 by the readers of Travel Leisure magazine (a prestigious tourism magazine in US).

Vat Phou is the oldest temple in Laos which was recognized by UNESCO as a World Heritage Site in 2001. This ancient temple was built in the fifth century to worship Shiva (one of the three supreme gods in Hinduism) and used to be the center of Hinduism.
Vat Phou is also known as “Mountain Temple” because it is located at the foot of Mount Phou Kao (Elephant Mountain), Champasak Province, about 670 kilometers from the south of Vientiane. Tourists can also travel by motorbike or tuk tuk (a Lao typical transportation of the local people) from Pakse city within the distance of 40 kilometers. 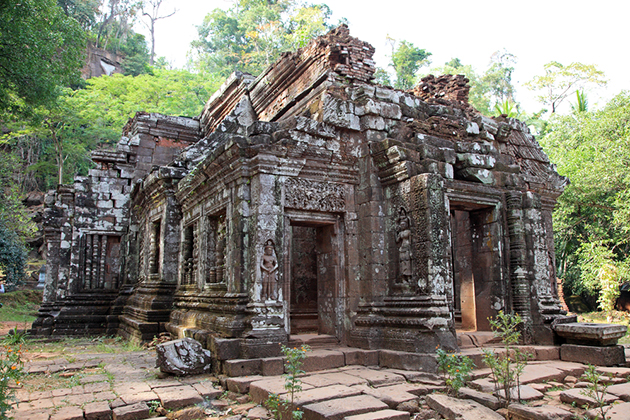 With the existing of more than a thousand years, even though it is now a ruin, Vat Phou is still an important religious architectural complex, which preserves the historical and cultural values of Laos. The main gate and the front side of the temple are now dilapidated, but still antiquely remarkable with the carved reliefs of the gods in Hinduism.
The temple is an attractive destination for many visitors towards the “a million elephants” country. They come here not only to discover the most ancient temple but also to pray in front of the gods. Vat Phou deserved admiration and appreciation of both residents and foreign tourists by its magnificent, mystical and sacred beauty.