Indochina is a culturally rich and diverse region counting numerous sites classified by the UNESCO in the World Heritage of Humanity. With a huge number of sites across the region, Indochina is home to 18 sites on the 37 UNESCO Tentative List of Southeast Asia. Especially, 13 wonderful sites listed in Vietnam, Laos, Cambodia and many more submitted for review, culture, histories, and landscapes, plenty of amazing things in your Indochina travel are waiting for you to explore.

Citadel of the Ho Dynasty

Based on the feng shui principles in the 14th century, the establishment of the Ho Dynasty Citadel testifies to the flowering of Neo-Confucianism and its expansion to other parts of East Asia. It is located in an axis joining the Tuong Son and Don Son mountains in a plain between the Ma and Buoi Rivers in Thanh Hoa Province. Composed of the Inner Citadel, La Thanh Outer Wall and the Nam Giao Altar, Ho Dynasty Citadel demonstrates the use of architectural elements in terms of space management and decoration designed for a centralized imperial showing a concept of royal power. The site was chosen for its natural beauty and symbolic feature as an outstanding example of a new style of Southeast Asian Imperial City. 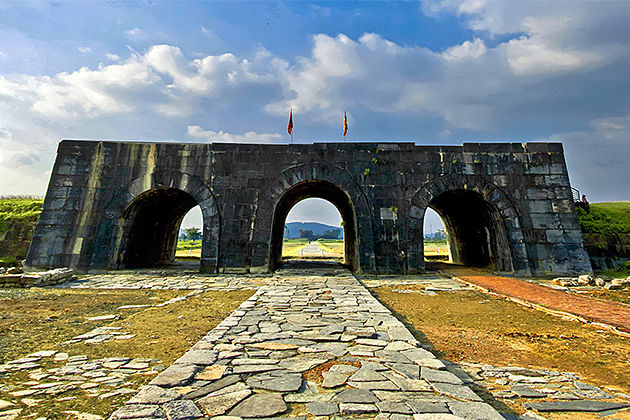 The Complex of Hue Monuments

Being the capital of unified Vietnam from 1802 – 1945, Hue not only the political but also the cultural and religious center under the Nguyen Dynasty, the last royal dynasty of Vietnamese history. Ngu Binh Mountain (also Royal Screen) and the Perfume running through the city give this unique feudal capital an entire set of the great natural landscape as well as defining its symbolic importance. The site was chosen for a combination of natural features such as Capital City, the Imperial City, the Forbidden City, and the Inner City. Nearby, the poetic Thien Mu Pagoda and many of the Emperor’s tombs are World Heritage listed also. 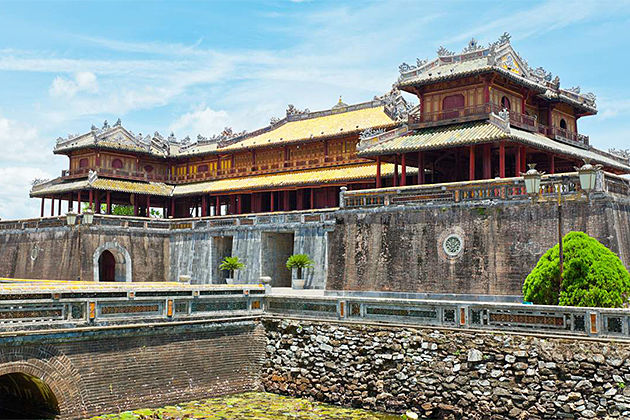 Located in Central Vietnam, Quang Nam province, Hoi An Ancient Town is a gateway on the north bank near the mouth of the Thu Bon River. It is considered an exceptionally well-preserved trading town in Central Vietnam that serves as a fine example of the local and international influences on a port trading town, dating from the 15th to the 19th century.
This UNESCO World Heritage Site comprises a well-preserved complex of 1,107 timber frame buildings, with brick or wooden walls. It includes architectural monuments, commercial and domestic vernacular structures, open market and a ferry quay as well as religious buildings. Winding lanes are lined with old shophouses, temples, and pagodas creating a thriving town full of living history. 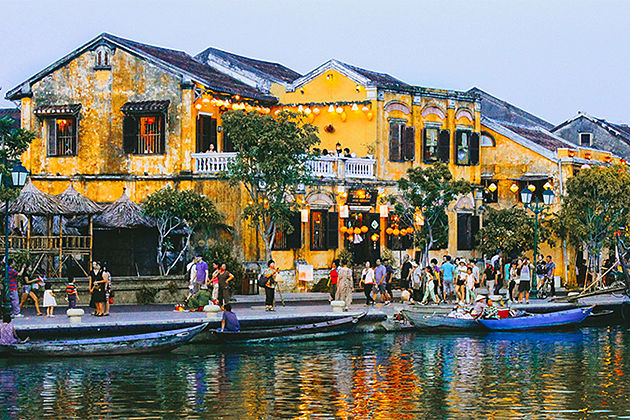 My Son Sanctuary is located in the mountainous border of Quang Nam province, in central Vietnam. Situated within an elevated geological basin surrounded by a ring of mountains, it provides the watershed for the sacred Thu Bon River. Also, the site was the capital of the Champa Kingdom for most of its existence from the 4th to the 13th century, a culture unique to the coast of Vietnam with spiritual origins based on Indian Hinduism. 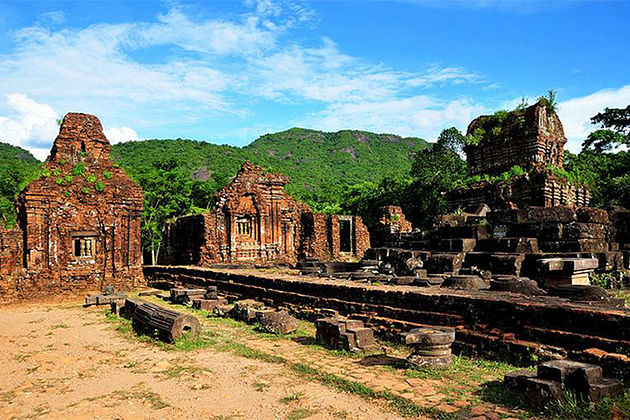 Halong Bay is indisputably one of the most beautiful landscapes of Vietnam. Located in the Gulf of Tonkin, in Quang Ninh Province, is 165km from the capital. Covering an area of 43,000 ha and consists over 1600 islands and islets, most of which are uninhabited and unaffected by humans, Halong Bay forms a spectacular seascape of limestone pillars. The outstanding feature of the site is centered on the drowned limestone karst landforms, displaying breathtaking pillars with many coastal erosion features such as arches and caves. All forms majestic natural scenery. These rock formations are listed not only for their pristine beauty but for their biological attraction. One of the best ways to experience this incredible landscape is on an overnight cruise. 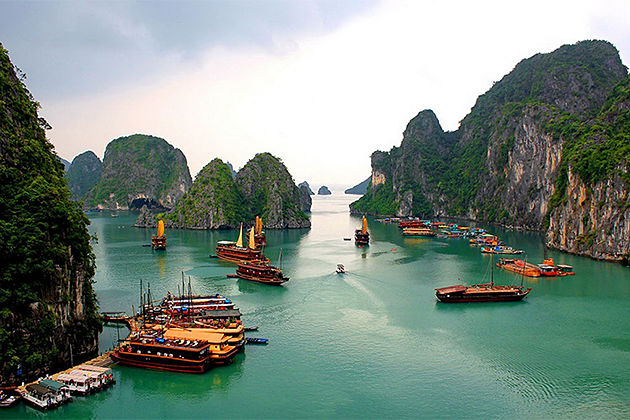 Phong Nha Ke Bang National Park is situated in the middle of the An Nam Mountain Range in Quang Binh Province. The sites contain over 104km of caves and underground rivers, making it one of the most outstanding limestone karst ecosystems in the world. The karst formation has evolved the Paleozoic period (some 400 million years ago) and is the oldest major karst area in Asia. 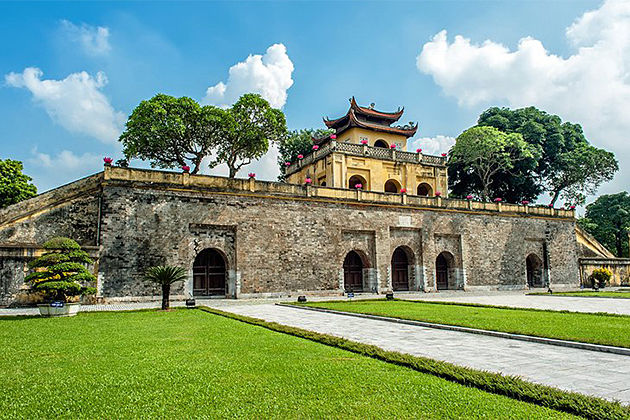 Trang An is a scenic area in Ninh Binh province, which is famous for its boat cave tours. Located near the southern margin of the Red River Delta, the Trang An Landscape Complex is a breathtaking combination of numerous limestone karst peaks permeated with valleys. Discovery of caves at different altitudes has revealed archaeological traces of human activity over a continuous period of more than 30,000 years. A visit to Hoa Lu, the ancient capital of Vietnam, will help you learn about the story of human occupation in the past. Also, this UNESCO World Heritage Site contains temples, pagodas, stunning paddy fields, and tranquil villages. 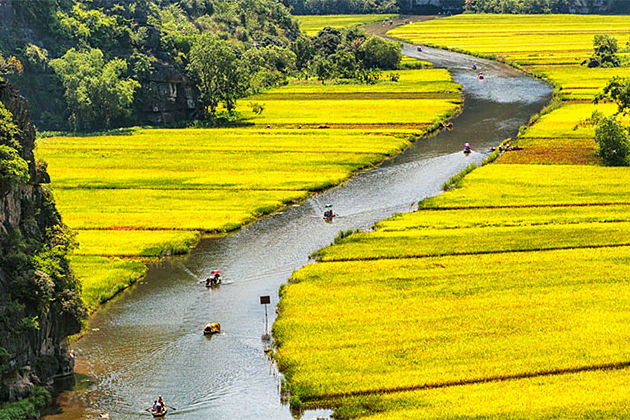 Built on a peninsula formed by the Mekong and the Nam Khan River, Luang Prabang is situated in northern Laos at the heart or a mountainous region. It is famous for both its rich architectural and artistic heritage that reflects the fusion of Lao traditional urban architecture with that of the colonial era. Its well-preserved townscape showcases the alliance of these two distinct cultural traditions.
Known as Muang Sua, then Xieng Thong, the town became the capital of the powerful kingdom of Lane Xang (Kingdom of a Million Elephants) from the 14th to the 16th century. Also, its wealth and influence were related to its strategic location on the Silk Route. The city was also the center of Buddhism in the Indochina region. 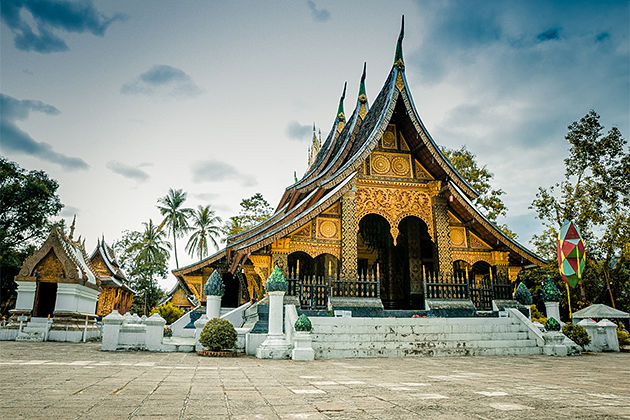 Vat Phou Temple Complex together with associated ancient settlements in the Champasak cultural landscape is remarkably well preserved planned landscapes more than 1000 years old. Its shape reflects the Hindu vision of the relationship between nature and humanity. People used an axis from mountaintop to riverbank to lay out a geometric pattern of temples, shrines, and waterworks extending over 10km. To planned cities on the banks of the Mekong River are also the part o the site, and the Phou Keo Mountain also. All represent the development of Khmer Empire ranging from the 5th to 15th centuries. 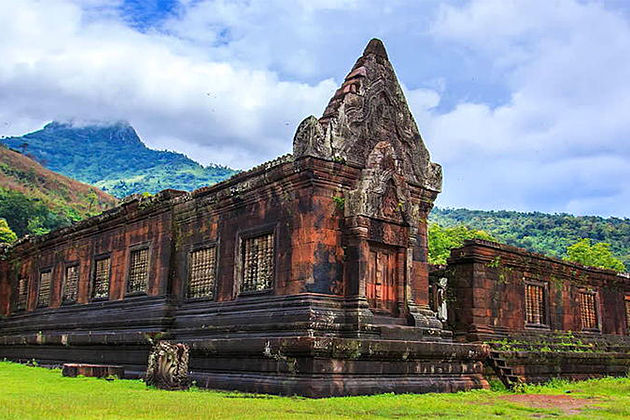 The Plain of Jars

The newest Laos’ UNESCO World Heritage Site is a group of fields containing thousands of stone jars cut out from rock thousands of years ago. These stone jars appear in clusters, ranging from a single or a few to several hundred jars at lower foothills surrounding the central plain and upland valleys. The sites are located around the city of Phonsavan in Xiang Khuang Plateau, North East Laos. In spite of the best efforts of archaeologists, the origin and reason for the Plain of Jars remain a mystery. Nowadays, the site most frequented by tourists is the one closest to the town of Phonsavan, locally known as Thong Hai Pin (Site 1). This is the first stop on the plain and a must-see for observing the only decorated jar found so far. Noticeably, only seven of the 90 jar sites have been declared safe enough for tourists to visit including Site 1, Site 2, Site 3, Site 16, Site 23, Site 25 and Site 52.

The first Cambodia’s UNESCO World Heritage Site called Angkor one of the most important archaeological sites in Southeast Asia. Once the biggest city in the world with around 1 million residents, the site stretches over 400 square kilometers and includes the well-known Angkor Wat, the historic Bayon temple with its sculptural carvings and Angkor Thom.
The ruins of Angkor are located amid forests and farmland north of the Tonle Sap Lake, south of the Kulen Hills. It is home to over one thousand temples, ranging in scale from nondescript piles of brick rubble scattered through the rice fields to the Angkor Wat. Thus, it is said to be the world’s largest single religious monument. Many of the temples at Angkor have been restored, however, these temples are still the symbol for Khmer architecture. 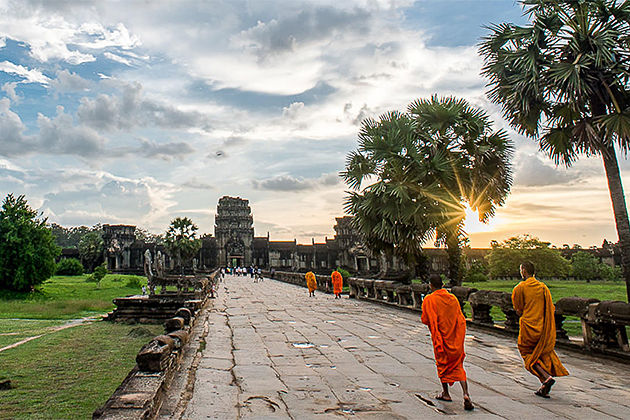 In the edge of a plateau in Preah Vihear Province lies the Temple of Preah Vihear which was built to dedicate to Shiva. It consists of a series of sanctuaries linked by a system of pavements and staircases over an 800 meter long. Its complex history can be traced to the 19th century when the hermitage was founded. Nowadays, the site is particularly well preserved mainly due to its remote location. Tourists visiting this site will have a chance to admire its unique architecture with numerous carved stone ornamentation. 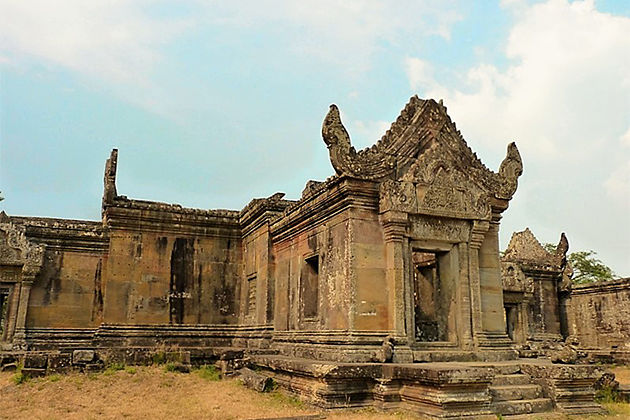 The archaeological site for Sambor Prei Kuk, known as “the temple in the richness of the forest”, has been identified as Ishanapura, the ancient capital of the Chenla Empire flourishing in the late 16th and early 17th centuries AD. With an area of 25 square km, the vestiges of the city include a walled city center and numerous temples, ten of which are octagonal, unique specimens of their genre in Southeast Asia. The characteristic of the pre-Angkor decorative idiom, known as the Sambor Prei Kuk Style, is reflected in the decorated sandstone elements in this site. Some of these masterpiece elements are lintels, pediments, and colonnades. The special art and architecture became models for other parts of the region and lay the ground for the unique Khmer style of the Angkor period. This Kampong Cham Province’s attraction was officially listed as World Heritage Site by UNESCO in 2017. 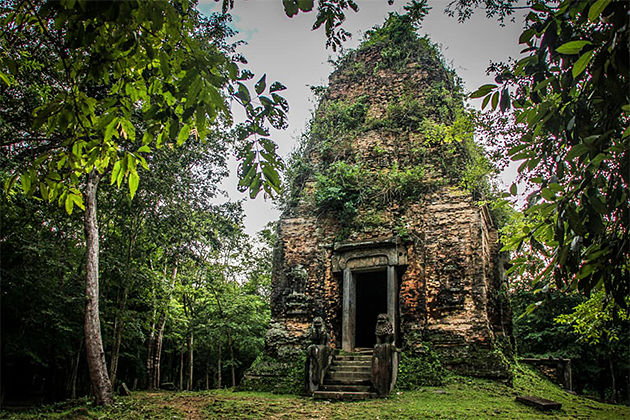 Understand your interests and needs, Indochina Tours offers ready-made tour itinerary: World Heritage of Indochina 15 Days covering all UNESCO Wolrd Heritage Sites in Vietnam, Cambodia & Laos. With 15 days at hand, you can soak up the diverse picturesque natural sceneries, majestic palaces, and temples as well as fascinating activities in the charming region. Besides, you also can create your trip to World Heritage Sites in Indochina that suits your requirements and budgets! Contact us or leave us a comment so that our travel consultant can get back to you soon!
Please note that your inquiry is totally free and under no obligation!